So you have your newly refurbished Dell Server – having been restored and rebirthed like a proverbial binary phoenix – primed and ready to go. All it needs now to fulfill your technological bidding: OS server software for Dell PowerEdge servers.

But what software can this puppy run?

Fortunately, Dell has released a pretty comprehensive whitepaper compatibility matrix for its PowerEdge Server line with Microsoft Server OS –link here. We’ll walk through some of the terms and terminology used, as well as give a little more background on server licensing in general and what exactly it all means in plain English.

Qualified vs. Supported, ‘LTSC,’ Legacy OS: What do all these terms mean?

You can see from the pdf matrix, that Dell quantifies levels of compatibility. In a nutshell:

You’ll notice a big chunk of the Server OS versions – Server 2008 through 2005 – are listed are under the auspice of ‘Legacy Operating Systems.’

What’s important to know here is even though Dell’s engineers have tested the Microsoft OS releases on their servers, these versions are no longer supported by Microsoft. So while the server may successfully run the OS, don’t expect any new updates or patches. This means that if any security flaws are discovered in the software by bad actors, Microsoft won’t release any fixes. Not to mention, any third-party software tools you use on your server will also no longer be updated and supported because the OS itself is outdated.

Bottom line: it’s probably not a good idea to use legacy/unsupported OS on your server.

What is this ‘LTSC?’ 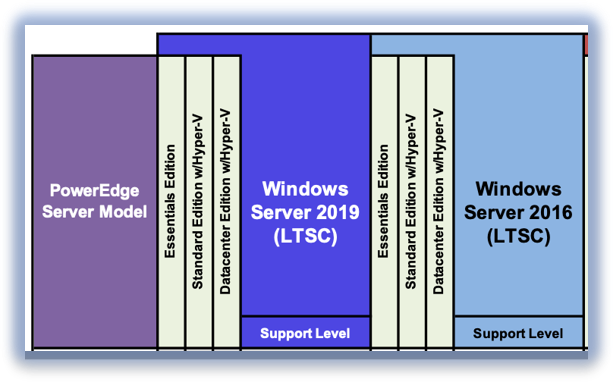 LTSC = Long-Term Servicing Channel - this is just a fancy term for the standard release model of software that Microsoft has been following for a while. It means that Microsoft releases new versions of Windows Server every 2 to 3 years and your server OS software entitled to 5 years of mainstream support and 5 years of extended support.

Now, as an alternative, Microsoft offers a separate release model called Semi-Annual Channel (SAC), where releases come out twice a year. It’s only available to Microsoft’s volume-licensed customers with SA (Software Assurance; Microsoft’s paid service that allows for upgrades to the next release) but it basically give you access to more frequent releases; hence quicker access to the latest features of Server OS. It’s advanced techy stuff, but if that sounds like something that might fit your needs, you can read about it here.

The above is a very general summary of what these versions do. As long as you get that Datacenter is for massive datacenters and lots of VM’s, Essentials is for a single, physical server hosting a capped number of users; and Standard is the middle ground between the two – that’s an excellent place to start.

While we’re talking about virtualization, know that is a significant trend in IT right now: the act of creating multiple virtual instances – each running their OS as if they were a unique CPU – on a single server. It allows you to do so much more with less physical hardware and resources. It’s all a little heady, but here is an excellent article that explains it well. 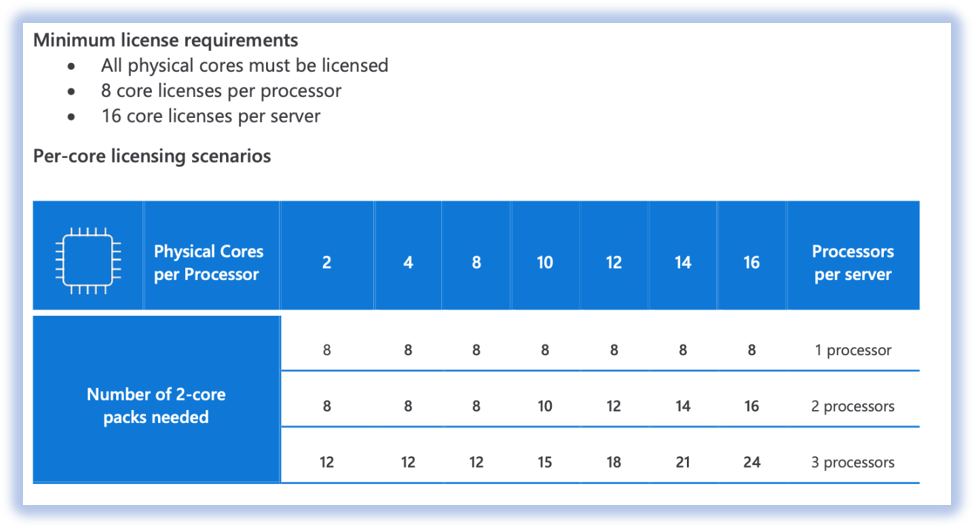 Remember: anything blank is unsupported. Qualified is the highest level of certification, and Supported and Limited are defined at the beginning of the doc.

However, if we drill down within the 2016 release, things get a little nuanced. Notice that the Standard and DataCenter versions are checked – Qualified from the central product column – the Essentials Edition is not. 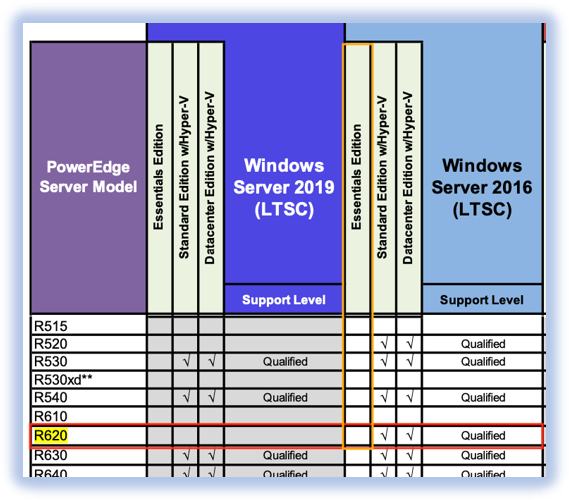 While DataCenter and Standard are indeed more robust versions of Server OS – remember, they are licensed by cores and not by Processor – as Essentials edition is. So while from a hardware perspective, the R620 could almost certainly run Server OS Essentials, the fact that it is a multi-processor with multi-cores makes it impractical to run this version of Server OS as you would need to license Essentials for each Processor. You get much more bang for your buck utilizing Server OS Standard.

Lastly, you’ll also notice for the R620 that is Qualified for Server 2016 but unsupported for 2019 (a handful of other servers fit this bill as well). Something to keep in mind is those servers likely ceased production shortly before 2019 – in the case of the R620, Dell lists the exact EOL (End of Life) on 5/25/2018. If Dell ended manufacturing the server in 2018, they probably aren’t going to have their engineers test the 2019 Server OS.